(enough to go round)

The rich are getting fatter and so are all the cats -
we’ll have to cook and cut them up and share them out like that.
There’s not enough to feed us all - that, of course, I know
but, back then in Galilee, the preacher showed them how.

As my old school teacher pointed out, it was good psychology -
the people there had brought their own and were shamed to share;
but shame’s a poor and scrawny guide to lead us back to sanity -
it’s been tried so many times before and fades into the air.

Love will make us want to keep companions safe and whole -
it’s what’s helped humans get this far since we left Africa to roam -
but love of strangers will not stretch to cover the whole globe -
the numbers now are much too great for anyone to cope.

These days we’re stressed to earn the bread to feed us and our own -
the greed of those who lead give bad directions to that road
by stealing everything they can with no regard for those they rob
and force their slaves to lose their heart or else to lose their job.

Bankers grow quite hale and sleek on fish and fowl and beast,
leaving fishermen and farmers to rot when these run out;
speculators burn down forests so they can simply feast,
the rest are left to drown in mud or starve in endless drought.

Our race has run a million years (depending when you start)
and, so far, we’ve been winning – in this we’ve been most apt.
But now we’re getting to the point where it might fall apart,
it’s time to use our brains once more and relearn to adapt.

I’m not some crazy cannibal who fancies feline meat -
I’ve tasted one wild carnivore who met death on the street -
but, if we wreck the oceans and the earth beneath our feet,
fat cats will be all that’s left for anyone to eat. 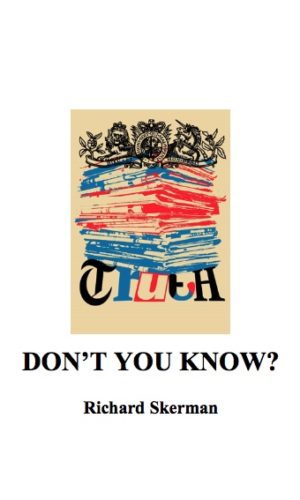 Below the bridge
She stands there grieving
Another history
Water
Drinking in the apartheid café
Feeding the five billion
Watergate
Innit?
Children of the dream
The rise of women
These are the days
Growing in the shadow of war
Chinoiserie
Distant thunder
Don’t you know?
Where do you come from?
No-one is illegal
Flamenco
Mother of exiles
Time Out
Sidelines

There are no reviews yet.

Be the first to review “Don’t you know?